In Part I, we covered the passion behind why building this viz was such an enjoyable experience for me. Now that you all think I’m crazy, we’ll go ahead and begin Part II, what was my approach to building the viz? Let’s get started.

Jerseys of the NBA was inspired by the work of some of my favorites in the Tableau Community, Neil Richards, Simon Beaumont and Sam Parsons. On August 5th, Neil published his second and third Minimalist vizzes, The Simpsons and The Muppets. And a few short days later, Simon published The Colours of the Premier League. While the idea of coloring shapes to create the characters and jerseys piqued my interest, it wasn’t until I saw Sam Parson’s VizForSocialGood project, The Plight of the Pride, in October, that I realized how I would approach building something similar whenever that moment came. I wanted to try doing something with polygons, but I didn’t know what that something was…until the tweet from Vince Baumel, that I mentioned in Part I. NBA Jerseys would be the viz, but 165 of them was far too many, so instead I landed on choosing my favorite jersey from each NBA franchise for a total of 30.

I had a good idea of what a majority of the jerseys would be, but for some teams, I needed a better idea of all the jerseys they had worn in their franchise history. So, a quick Google search led me to jersey museum. Once there I began jotting down a list of my favorites for each team. I got only so far before the temptation of building one was too much, so I tested it out with a classic Portland Trailblazers jersey (below), mainly worn in the 1980’s. Now that I had proved to myself this could actually be done, it was back to finishing the list of which jerseys would be selected for each team…ok, quick confession. I actually REALLY like the 1990’s Toronto Raptors jersey (below) with the Raptor dribbling the basketball, but thought “how in the hell am I going to re-create that Raptor???” A bit too intimidated, that was the one jersey I shied away from.

With the jerseys selected, the next step was to plot a few of them out on graphing paper, so I could see what the X/Y coordinates needed to be, when adding the stripes and shapes within each jersey. 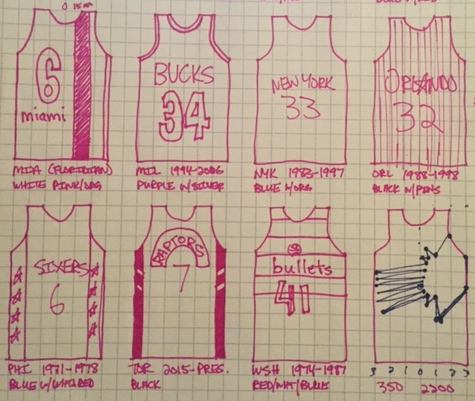 I quickly learned the easiest route would be to create an outline that would be identical for each jersey and from there I could layer on the other elements as needed. In Tableau, I set my X and Y axes both to run from -500 to 500. However, since jerseys aren’t square, utilizing only the area from -300 to 300 on the X-axis, gave them the appropriate shape. So, the jersey for every team first ended up with this 18-point path as its outline, along with a color ID, based on the primary color of the jersey. All of the colors come from Team Color Codes, a fantastic site if you do any sports related vizzing. My personal preference is to steer clear of using team logos, so the use of team colors provides a nice alternative way to create an easy connection for the reader. This of course assumes the reader is somewhat familiar with the sport.

With all 30 teams equipped with the outline of a jersey and a primary color assigned, it was now time to add in the details. A majority of these were straightforward stripes going down the sides of the jersey or pinstripes in the case of the Charlotte Hornets and Orlando Magic. By far, the two most cumbersome to create were the Phoenix Suns, with their exploding sunburst design and the Denver Nuggets 1980’s retro with the mountains. Plotting the sun on the Suns jersey required a 25-point polygon. To get the stripes/shapes to show up on top of the primary color, a simple sort on Color ID was needed. As you can see, in the Suns case, this brings the sunburst to the foreground.

For the Nuggets jersey, I created the six horizontal stripes first…realizing after the fact that I could have left the dark blue one out, as that was already the primary color. Once the stripes were in place, came plotting out the mountains. For this I used a nice trick I implemented early on in the process, shown below. Navigating to the worksheet for the Nuggets, I turned down the color opacity to somewhere around 30-40% and turned grid lines on. This allows you to see through the jersey and see the grid lines at the same time. With this strategy, it actually only took two passes to get the 49-point polygon for the mountains to the point where they looked really good compared to the actual version. With the jerseys slowly coming together, one major hurdle still stood in my way of being able to produce something I would be proud of…the text. With Tableau Public only supporting a handful of fonts, how would I ever get the names and numbers of each team to remotely resemble the real thing? I think you all know the answer to this, so say it with me…PowerPoint!! It may have been very time consuming scrolling through fonts and saving image after image to be dragged into my Tableau dashboard, but PowerPoint allowed me to basically tie up all of the loose ends on this project. And, by the way, if you haven’t seen it yet, I want to give a quick shout out to Kevin Flerlage for his fantastic blog post and video, Tableau & PowerPoint A Match Made in Heaven. 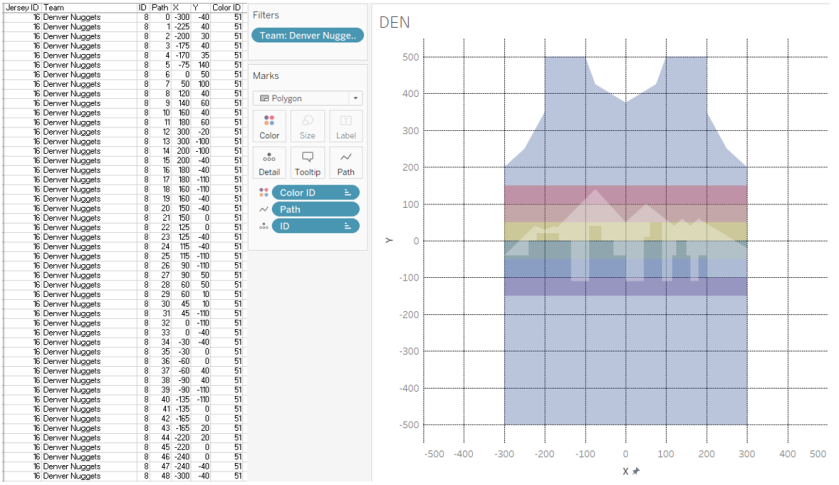 Step 4. PowerPoint to the Rescue

With a canvas full of partially complete jerseys, it was the power of PowerPoint that allowed this project to reach completion. Starting with the Boston Celtics in the upper left-hand corner of the viz, one by one, I created the lettering and numbering, for each jersey, in PowerPoint. I then saved those as images and dragged them onto the final dashboard in Tableau. As I mentioned earlier, a majority of these consisted of simply scrolling through fonts in PowerPoint along with some NBA team-specific fonts I had downloaded, to find the best match. When the dust had settled, here’s what one of my working PowerPoint slides looked like. Slightly a disaster, but it got the job done! 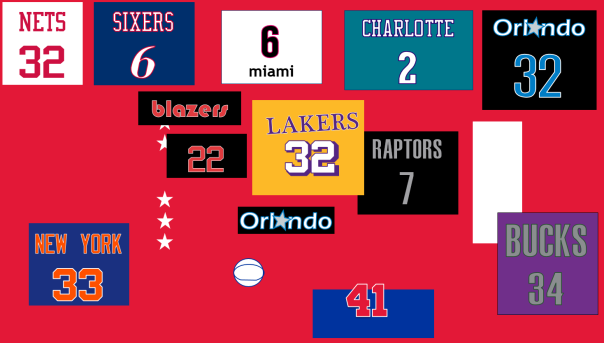 Of course, a few of these were trickier than others, specifically designing the logo for the Golden State Warriors “The City” jersey. Unwilling to attempt drawing the Golden Gate Bridge with polygons in Tableau, I turned to PowerPoint and five minutes later, we had ourselves a logo, shown above. Once everything was created in PowerPoint and saved as an image, fifty or so drag and drops later, some formatting and alignment and the Jerseys of the NBA viz was complete. Here’s the final product as well as link to the Tableau workbook. Thanks so much for reading and have a great day!!