This week for #MakeoverMonday, the data set is ISS Spacewalks, which takes a look at the 216 Spacewalks at the International Space Station, from December 7, 1998 through April 8, 2019. The original visualization (pictured below) shows the difference in spacewalks in U.S. Spacesuits vs. Russian Spacesuits. Let’s get started. 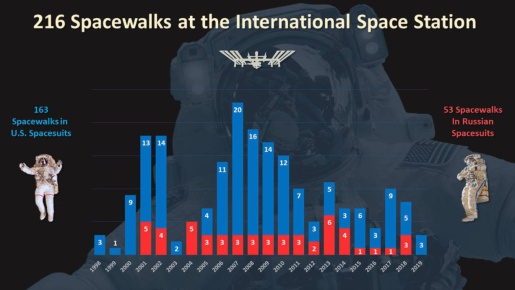 There were two data sets this week. For my analysis, I’ll be sticking to the ISS Spacewalks data set, which is super simple to understand. However, if you choose to build a visualization using the Spacewalk Detail data set, you may want to do a little research to get a better idea of the history of the various missions throughout the years, as that data set contains more information pertaining to each individual mission. Some light reading could help you tell a more compelling story, should you choose to go that route. Ok, back to the ISS Spacewalks data set, here’s what it looks like; we have Year, Nation and Number of Spacewalks. Yep, that’s it. So, what did we like about the original viz?

I liked the original viz, as it was easy to understand that since 1998, many more spacewalks have taken place by American astronauts than by Russian astronauts. However, stacked bar charts can be difficult to read, so my goal was to move away from that chart type in favor of an easier to read chart type that would highlight the fact that the United States has had more spacewalks than the Russians in all but three years.

My main goal here was to display the data in a way that is easy to understand. I feel that when highlighting the variance in American spacewalks vs. Russian spacewalks, from year to year, the bar in bar chart does a better job than the stacked bar. Of course, there are other chart types that would work as well, but we’ll go with the bar in bar this time. Now, I’m also a big fan of work that is visually appealing and bar charts aren’t the most elegant, especially when you put one inside of another. So, after starting out with a regular old bar in bar, I quickly decided I needed something a little more pleasing to the eyes…insert the rounded bar chart. This video by Andy Kriebel is a great resource if you’re not sure how to make them in Tableau. Below are the final charts, my eyes are much more drawn to the rounded version, how about you?

So, with the chart built, you can quickly see 2004, 2013 and 2014 are the only three years in which Russia had more spacewalks than the United States. You’ll also noticed I stuck with the colors from the original viz (however, I softened them a bit). I used them because they are familiar to anyone who has seen the original and I wanted them to be the only colors used, other than a shade of gray for text not related to the U.S. or Russia. A few other changes I made was to add a y-axis for the number of spacewalks, while removing the grid lines and rotating the labels for year, so they are easier to read. I went with a shade of black for my background, added a tooltip, title and some info in the footer area and was ready to publish. Here’s what the final viz looks like. An interactive version can be found on my Tableau Public page, here. Thanks for reading!!