For week 2019-30 of #MakeoverMonday, Andy published his 800th Tableau Public viz!! Congratulations Andy, what an unbelievably incredible feat. For week 2019-31, we were given the opportunity to makeover one of Andy’s first ever Tableau Public vizzes, a dashboard examining STD Infection Rates in the United States, from 1996-2014. For this challenge, I wanted to produce a dashboard with a similar layout and design to one I might create in a business setting. It’s worth noting that this post will focus on design and won’t go into what worked/didn’t work with the original dashboard, what the data looked like, etc. Heading into the makeover, my focus was to create an exploratory dashboard while achieving five goals; communicate clearly, keep it simple, effective design, effective use of color and effective use of text. Let’s take a look at how the dashboard came together.

With nineteen years of data on three diseases, sliced by gender, as well as seven different age groups, covering fifty states + the District of Columbia, I saw a dataset that had the potential of quickly getting away from me if I wasn’t careful. How could a user consume all of this information, in an easy to use format, while not being overwhelmed? That was the question I needed to answer. To communicate clearly, I chose to use interactivity that allowed the user to select whatever mattered to them. I then chose simple chart types and the use of color/highlighting to help focus the user’s attention.

Everything placed on a dashboard should add value to the user. Sure, six KPIs felt like a lot. But, with the addition of the bar chart trend, set in the background (a trick learned from Tableau Zen Master Ryan Sleeper), I felt breaking out the disease rate trends by gender, which the dashboard otherwise did not contain, added value.

As mentioned above, I kept it simple with common, easy to understand chart types; callout numbers (or BANs), bar charts, hex maps, line chart and dot plots. That’s it! When exploring the data, several other chart types were tested, but ultimately, the others did not communicate the data as clearly as the ones chosen.

As mentioned earlier, my aim was to create an exploratory dashboard which achieved five goals. Thus far, in my experience in the business world, I have mostly designed for consumption on either a laptop or desktop computer, so chose to go that route with this dashboard as well. I felt the dashboard didn’t need to be very big, so went with a 900px by 850px layout. Tableau’s recent addition of collapsible containers will be huge for filter placement on dashboards, so I’m really looking forward to the time when my current client updates their version of Tableau!! That said, when designing a dashboard with just a few filters, my preference is to create a bar (horizontal container) along the top, that separates the title from the viz and then drop the filters/parameters into the bar. This makes them easily accessible to the user, without taking up much real estate.

I then dropped the KPIs just below the filters bar to ensure they were one of the first things the user saw. The decision was also made to leverage a hex map to drive interactivity to other parts of the dashboard. Because the map was vital to the interactivity, it seemed that the only logical place for it was in the upper left-hand corner, where our eyes are drawn to first. Here’s what the dashboard looked like with those three components in place. At this point, it was beginning to feel like we were on to something. 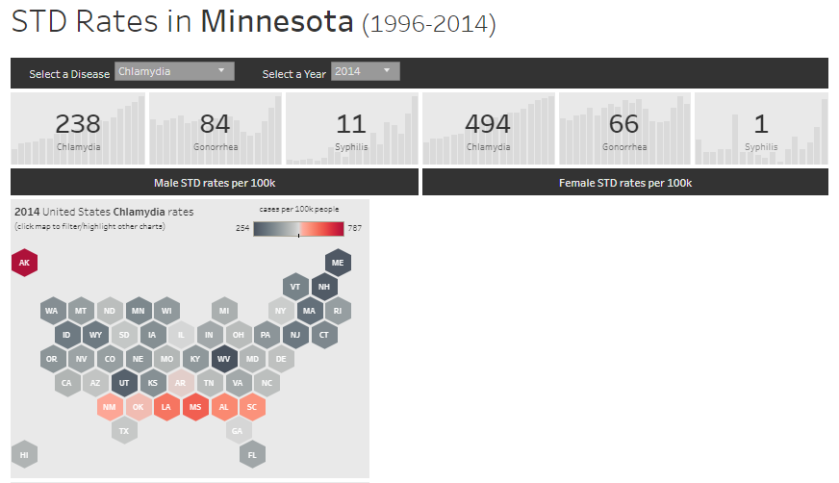 With the addition of three other sheets to show trends and comparisons, I felt we now had a dashboard that contained a ton of great information, in an easy to consume format. Remember that it is very important to give the components of any visualization a chance to breath, to allow for flow and ensure the viz is not crammed together. Therefore, I always use padding in my vizzes. Here’s a great blog post by Tableau Zen Master, Adam Crahen, on the use of padding.

Goal 4. Effective Use of Color

While the dashboard was coming together, the important pieces of data could not stand out for the user without leveraging preattentive attributes. I chose to use color to help the data stand out and after walking through many variations, landed on black dots for the dot plots, indicating the state that had been selected from the map, as well as a black line on the trend line, indicating the disease that had been selected from the parameter at the top of the dashboard. Now, when the user selected a disease from the parameter and a state from the map, they would see the following highlights, in the dot plots and line chart. The black dots allow for a nice, clean comparison of the selected state vs. all other states, for each age group, broken out by both male and female. And the highlighted line chart allows the user to quickly see how the trend of the selected disease compares to the others. And remember, to get a zoomed in trend for both male and female, we just need to look at the bar charts in the background on the KPIs. 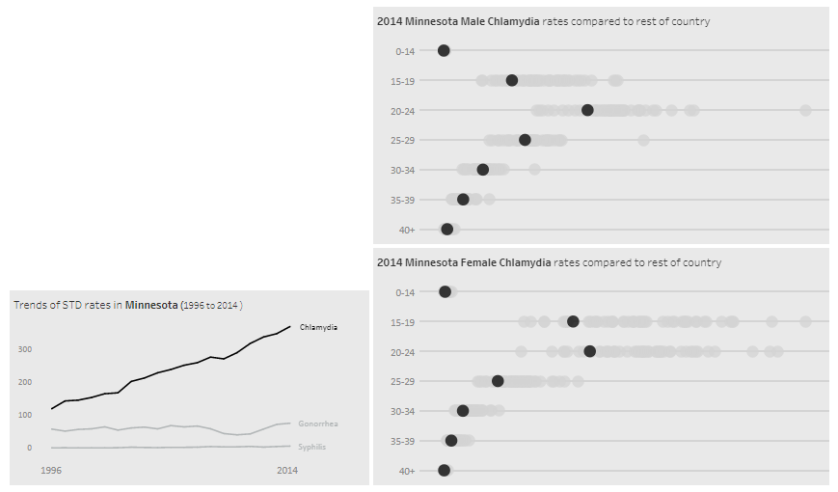 Goal 5. Effective Use of Text

While, it has already been shown in the above screenshots, the last piece added was the dynamic titles, which help the user identify which state and disease are being analyzed, as well as which year has been selected, as this would impact the KPIs, hex map and dot plot views. Finally, making this dynamic text bold would signal to the user that these pieces of text were dynamic and would update with the interactivity of the dashboard. Here’s a link to the interactive version on my Tableau Public profile and below is a view of the final product. Thanks for reading and have a wonderful day! 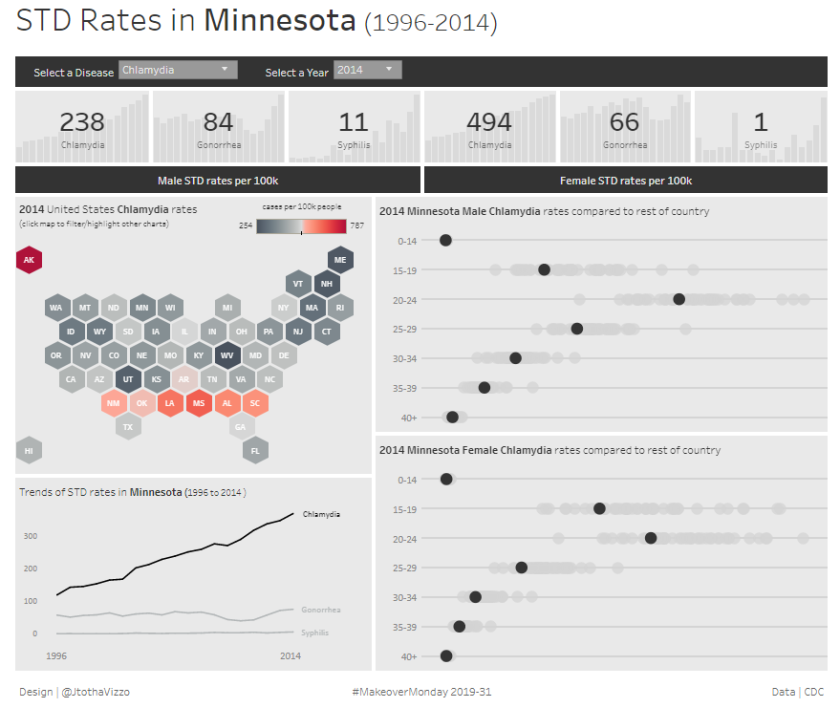